Overcome the challenge of playing and singing at the same time 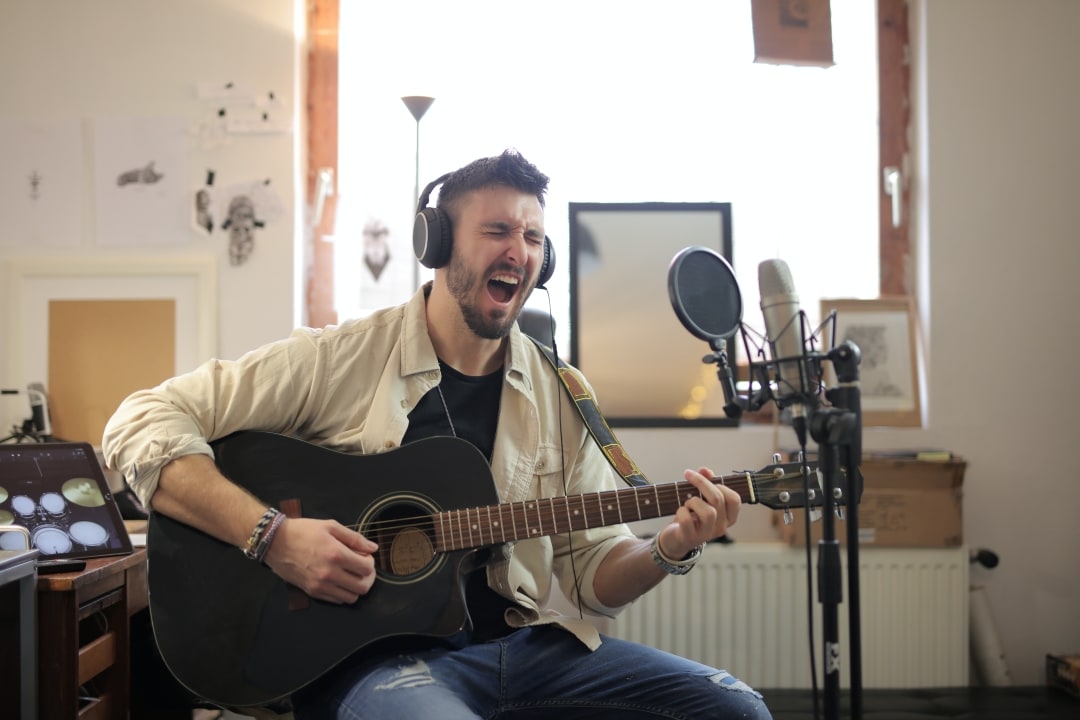 An all-round artist must be able to play an instrument and sing along without undermining his performance of one or the other. For example, the success of Bob Dylan shows that beyond his writing and incomparable songwriting expertise, the symbiosis between playing and singing comes from emotion. He never was a guitar or piano virtuoso, and his voice is closer to the Swan Lake wild duck's. Nevertheless, his songs are timeless partly thanks to his live and studio interpretations. His style, accentuations, emphasized down beats, his management of rests, sustained notes, word placement, all skillfully coordinated compose an exceptional performance. When overcome, this true challenge is extremely satisfying because you access the power of conveying emotions to your audience.

How to play and sing at the same time?
De-synch to win

In order for a song to be beautiful and have a strong impact you must not only know how to play and sing at the same time but also not sing the exact replica of what you are playing on your instrument. That would be too simple and terribly linear. To achieve so, you should consider these exercises independently. Like a drummer that must dissociate each limb (to avoid drumming like a Playmobil, both hands and both feet at the same time), you will need to have your hands and your voice on two parallel roads that can sometimes cross.

How to sing and play at the same time?
Step #1 : Whistle before singing

Even if we won’t spend too much time on this so as not to get bad habits: play a simple song, with few chords, and have fun whistling what you are playing. Then, instead of singing, try humming the same thing. Do not articulate, mumble it, it’s the first step. For the most part, it should not be too difficult. If it is, it may be that you are still lacking some control over your instrument since we have not yet really called upon your voice. In this case, all this is premature and you should focus on working further on your instrument first.

How to sing and play at the same time?
Step #2 : Simplicity and deconstruction

It consists of training each element separately until you master them both perfectly. Mastering does not only mean to play or sing the parts correctly but playing or singing them almost automatically. If you have to think about what the right lyrics are, or the position of the next chord, it will definitely fail when it’s time to merge the two. Start with a cover track you are familiar with, and pick the easiest possible. The key starting point will be the rhythm.

Start with your instrument. Reduce to a minimum all the playing effects, stick to a simple accompaniment with chords. If it’s on a guitar, play without alternate picking for example. Just the downstrokes on a slow and simple rhythm, perhaps an extremely slow one, even if you are able to play something more complex. Remember that you are not here to test your dexterity at the moment. Pick a song with few chords, ideally, you might as well simplify to a single chord at the start of each sung phrase. Whether or not you like the song, you’ll notice that when you get to sing and play it at the same time you will love it! Anyhow, count out loud the rhythm while playing: 1, 2, 3, 4… Chord on 1, rest on 2, 3, 4, and so on. It’s a bit tedious but you must go through there. Use a metronome!

Then we move to the singing. Without your instrument! This time, unless you are a master of beatboxing or polyphonic Mongolian singing, you won’t be able to sing and count the tempo out loud at the same time. Do it in your head and try to visualize the tempo in your mind. However, use your feet to tap to the rhythm.

Once you are mastering this, try combining the two. If you chose a song like we described you shouldn't find it too difficult. After a few trials you should now accomplish what you were never able to do before: to sing while playing.

How to sing and play at the same time ?
Step #3 : Fight against your subconscient.

Don’t stop on that uptrend. Keeping this same example, let’s level up. If you followed our tips to the letter you should have chosen a song in which your instrument only plays at the start of each bar. Assuming that the song is in 4/4; now play on all 4 beats with a chord each time. Now again play separately, then together with the instrumental and vocal parts. Your chords must match the same tempo you were tapping with your foot earlier.

When you reunite the two parts, you will notice an unconscious phenomenon: You unknowingly modify the singing to match your instrument’s melody until each chord gets emphasized by a word. Aren’t you? That is something you do not want to do. You will have to work relentlessly to fix this natural defect.

Once you overcome this obstacle, to make all this less mechanical; let’s try playing with alternate picking if you are on a guitar or a bass. Don’t panic, it’s the same movements you were already doing with an added upstroke to get back to your upper position. Continue tapping the tempo with your foot.

In a broader sense, once you've perfectly mastered these simple exercises and move to more complex rhythms and singing, where you will have to play faster phrases or singing off-beat, focus on the complex parts and play them at very low speeds. Bring the tempo up gradually only when you feel at ease with your current playing speed.

These were all our tips for you to master playing and singing at the same time. You can always use the backing tracks available on Jamzone to make all this more fun. Keep training and you will be there in no time!

Photo by Andrea Piacquadio from Pexels